Skip to the beginning of the images gallery

Generally, alphabet practice books are full of tracings, practice patterns and so on, in the oft-repeated red and blue layout. While compiling this combo of Alphabet Practice Books for Kids - II (Combo of 3 Books viz: Capital, Small and Cursive Writing), the team at Target Publications has attempted to break away from this old rule. All three books in the combo are equally interesting and infused with colour in order to help 3 - 7 year old children learn alphabets.

A wise old saying which goes something like this, ‘Practice makes a man perfect’, holds true even today. To learn a certain concept by heart, a lot of practice is evidently expected, but sometimes over practice could prove to be detrimental. To prevent this, we collated three practice books which would transform learning into a fun and engaging activity. Every page of these books is characterised by a subtle colour and two distinct examples. This gives children an idea of how to understand and relate to an Alphabet in more than one particular way.

Utmost care has been taken about the font that has been used in the books. Every page starts with a bold letter. The purpose of this is to reinforce the look of that particular alphabet, be it small, capital or cursive, into a child’s mind. The fact that we haven’t followed the traditional norm in the book works perfectly in the favour of the kids. All the three books in the combo are full of colourful illustrations that encourage kids to practice more and fall in love with alphabets.

The Alphabet, better known as the Abcs, in simple words is a collection of letters and their sounds. The ABCs of Alphabet work as important building blocks for the linguistic development among children. Alphabets soon begin to take form of words and sentences and thus effectively aid in speech and communication development. We sincerely hope that this combo would affect the learning process of children in an extremely positive manner.

More Information
Reviews 1
Write Your Own Review
Also available on 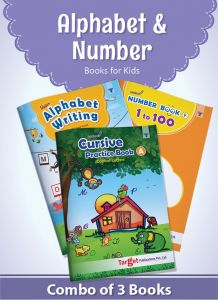 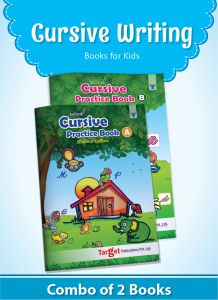